Andrew Marshall has written more sitcom episodes than you could shake a suggestively-shaped stick at. He co-wrote Whoops Apocalypse, Hot Metal and If you See God, Tell him with David Renwick. Then he went on to create 2point4 Children which ran for eight series between 1991 to 1999. Yes. Eight. Somehow, he also found time to write two series of Health and Efficiency (1993-95) and two series of Dad (1997-99). This man knows a thing or two about sitcom. And this was after he had written for Not the Nine O’Clock News, Kenny Everett, Spike Milligan and Alexei Sayle. Most of us would settle for a quarter of his career. Owing to what I can only assume is an administrative error, or poor judgement on his part, I got to ask him a few questions.

So, Andrew, what or who inspired you growing up?

Well, first of all, let me say that I'm not really under any illusion that anybody would desperately want to know these details about me, but since you ask, it was radio and TV comedy itself that I became enamoured with at around the age of 10 fuelled by Round the Horne, I'm Sorry I'll Read That Again, Do Not Adjust your Set and later, of course Python, Laugh-in and The Goodies.

At what point did you realise you were a writer/comedy writer? 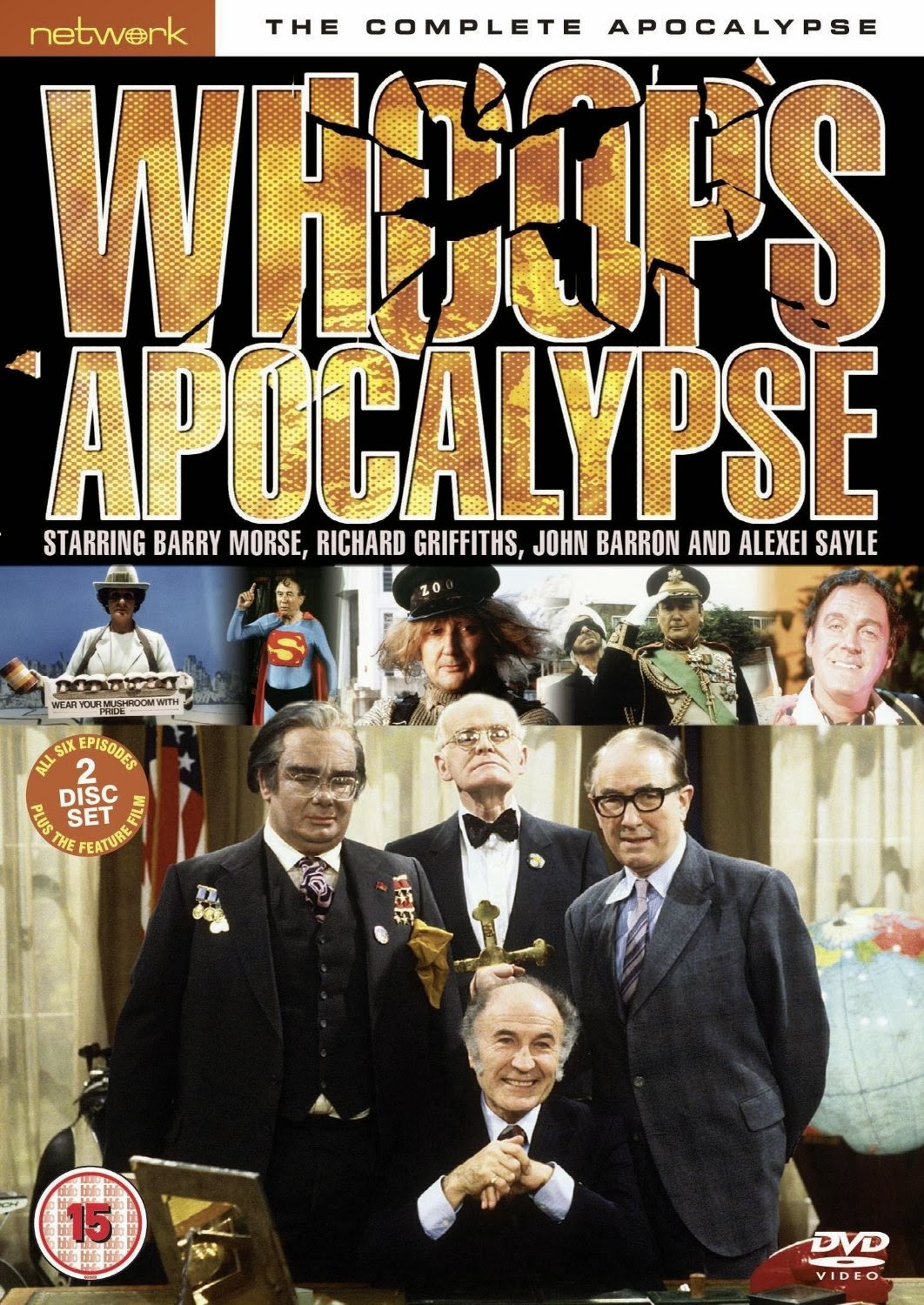 Being a Comedy Writer looked like fun - after all Dick Van Dyke had a nice life - and was, in those days, pretty much the only entry point available to a person like me. I was aware the Barry Took had taken a course something like that, but unaware he had been a Variety Standup in his early days. That would have put me off. This is hard to explain to people these days, but I had no desire at all to become famous, only to make comedy. In fact, I still don't. When I have to make occasional appearances for one reason or another (such as demonstrating that I'm not dead yet) it still requires tremendous effort.  Sadly it is periodically necessary.

I started sending in scripts when I was about 11ish I think, and made contact with Humphrey Barclay, Ian Davidson and David Hatch, who were all encouraging.

When did you first receive money for something you wrote?

I can't remember the first thing I sold, but I would have been about 14-15. I sold a whole lot of terrible "quickies" to Braden's Week and Dave Allen at Large.

So for you, it's all about the comedy, rather than the industry or being famous - or even making a lot of money. Do you see Comedy as a riddle to be solved? I sometimes see needing to make an audience laugh and each joke/storyline/plot is a way of solving that puzzle - and hearing an audience laugh means you found the right answer. Maybe that's just me.

I don't really know what drives a person to want to make comedy, but driven is the word. I think for me, it's possibly a deep desire to please, surprise and delight people, and in some ways I almost feel it's something like an essential public service, like the electricity supply. It makes people feel better, puts things into perspective, and it feels like a useful thing to have been put on earth with a knack for supplying. Yes, I think more than anything, it makes me feel useful to the world, a feeling I like.

I think the reason probably varies from person to person, which is why your riddle solving story doesn't chime with me. I rarely need to think about what's going to get a laugh, I just seem to know most of the time, heaven knows why.

So it is just me. Fair enough. What gives you most pleasure about the things you've written?

I rarely feel that a finished show gives me pleasure, exceptsofar as being completed. Sometimes a finished script, though, being in it's "ideal" that is to say imagined form, does. In general, the idea that I'm pleased with my body of work overall is not accurate. I'm usually wanting to continue in the hope of doing better next time. I rarely go back in thoughts about completed work, when they're done, they're over.

Your first TV sitcoms were Whoops Apocalypse and Hot Metal - which were clear about big subjects and could be seen as very satirical. Were these things you felt passionately about - or where they big structures on which you could hang jokes, develop characters and escalate stakes?

The three satires David [Renwick] and I wrote, "Whoops", "Hot Metal" and "If You See God.." were from genuine anger about the subject matters. When I wrote my first (narrative) solo material, I'd had enough of being angry for a while and wanted to present something optimistic, as a more uplifting kind of experience. It was also a conscious move from writing from "Up Here" to writing from "Down There" as Dennis Main Wilson once cleverly defined the two viewpoints. Less elitist and more democratic, if you like. I tried to avoid any flavour of the writer saying "look how clever I am" and tried to simplify the style as much as possible. Again, I'm not sure I entirely achieved that.

I've found that writing with someone else hardly feels like work at all, whereas writing on my own is a real battle. Did you find writing things on your own to be a struggle or something of a release?

I assure you that collaborating with David feels very much like work. But in a good way. I commented to David at the time that I thought it was more than twice as difficult doing it by myself.

Did you have a David Renwick in your head for at least some of the time sharpening your solo writing?

Hopefully we both carry elements of the other's perspective with us as we continue.

How come you stopped writing together?

At one point when we were writing together, David had a bad car accident, and it forced me to consider whether I'd be able to write big narrative things by myself if I had to. He already did a certain amount by himself, so it was no problem for me to try.  We never quite managed to coincide things again, because either one of us was busy on one thing or another, so that came about quite organically, rather than as a decision of any kind.

2Point4 Children (pic below) was a huge rollicking success. Did it feel like that at the time? 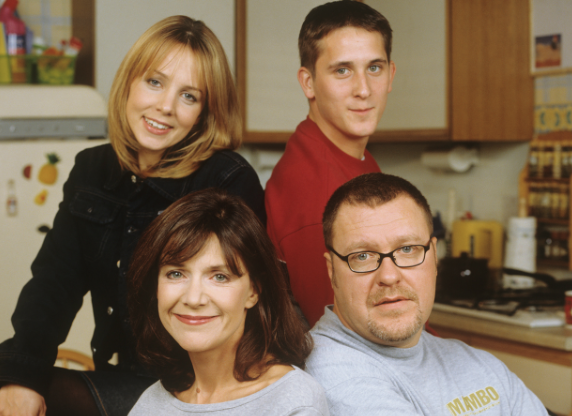 I don't think at the time there was any feeling about it's success. Of course the Cast had a better idea, they were recognised in the street, but (luckily) the Writer remains completely anonymous wherever he or she goes. So, no, there wasn't really any feedback to me at all, other than the figures. We seemed to have a tiny budget too, compared to some other more prestigious shows, which was slightly annoying.
We never had any funds for composed music, for example, meaning we had to use records, the copyright clearance of which now make dvd releases financially unviable. And we didn't get paid a lot of money. The fees were quite low as it was the BBC, and there was no automatic buy-out. I wish we had, I could have given up by now!

Big family sitcoms always bring out the sneeriest side of critics. Did that really take the edge off?

Gary [Olsen] was once very upset when the BBC mounted a "Best Comedy of All Time" Extravaganza, to which no-one from our (still running) show was invited, but seemingly everyone else was. I'm afraid I rather expected that, as it was somewhat par for the course. (In case you're wondering, it was won by "Men Behaving Badly" - a great show - but the best of all time?) I rather suspect the management, in company with the critics, never actually saw the show, but formed their opinions from the title and perhaps a trailer or two.

And overall, was it the show that you hoped it would be?

As always, I felt the quality of the shows was variable. Some episodes still make me shudder, others seem great fun. There are myriad reasons for that, some attributable to me, some not. I did feel Series 6 had a great improvement in consistency and style, but as before, nobody really noticed, as they'd all long since decided what they thought about it.

I feel overall, that it pretty much achieved it's goals, albeit with the normal ups and downs of a long running series.

Looking back at comedy in the 80s and 90s, it seemed like that there was an awful lot of half-hour comedy on TV - especially given for most of this time, there were only four channels. And fewer people trying to be writers. Did it feel easier to get a show commissioned back then?

I don't really know whether it was relatively easier to get a show commissioned in the nineties, as, to compare I'd have to be of an age and experience again that I was then and try now. Which is impossible. But it does seem particularly hard to penetrate the system at the moment, according to most people I know. There are probably less slots, less money, and less opportunity to take a risk. Hopefully funnier times are around the corner.

You're going to need reserves of determination, and persistence, now, during the high points and right up to the moment you retire, if that ever happens. So, don't be put off easily. You're never too young, too inexperienced, too familiar, too old, too traditional, too radical, too uncool, too black, too female, too weird, too conventional, too deaf, too Portuguese, or too anything for anyone to stop you making the comedy you feel driven to make. And if you don't feel that, then you shouldn't be doing it.

If you'd like to spend more time thinking about writing situation comedy with me, there are a few places left on this course on Friday next week (21st March) in London (sorry - it's a nuisance for me too as I don't live in London either, but London is probably easier than Shepton Mallet). More details here.
Posted by James Cary at 10:36